Ed Bacon: Planning, Politics, and the Building of Modern Philadelphia 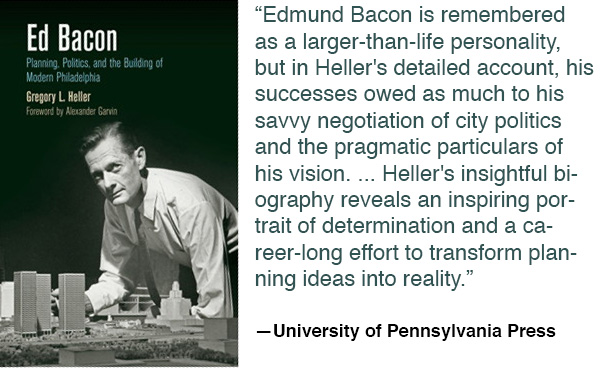 “Edmund Bacon, probably the most relentless and determined of all planners, believed that the most important and difficult thing to do was deciding what to advocate and that the trick in making that decision was selecting something that you could bring to fruition. . . . We are fortunate in having this stunning biography by Gregory Heller. The result is an engrossing story explaining how modern Philadelphia took shape.”
—From the Foreword, by Alexander Garvin

“Gregory Heller’s Ed Bacon: Planning, Politics, and the Building of Modern Philadelphia provides a thorough, engaging, and compelling story about the career of Philadelphia’s most prominent urban planner. . . . The book’s content is extremely well documented and provides the reader with a new perspective on many of the city’s rather famous midcentury plans and development projects. Aside from the rich historical narrative, which is valuable in and of itself, the book succeeds at making clear connections to contemporary planning practice. . . . A terrific contribution to the literature on planning history, the politics of urban planning and development, and the value of physical planning.”
—Stephanie Ryberg-Webster, Journal of Planning Education and Research

“Heller’s book gives us a fascinating—and sympathetic—account of Bacon’s accomplishments. This, in itself, is big news. Until recently, the imperious midcentury planners were invariably cast as bullies, who steamrolled heroic community types and flattened living neighborhoods. Not anymore.”
—Inga Saffron, The New Republic

“Ed Bacon: Planning, Politics and the Building of Modern Philadelphia, a new biography by Gregory L. Heller, presents Bacon as the third pole in the mid-century struggle between Jacobs and Moses for the soul of the American city.”
—Ben Adler, Architect

“Equal parts history, biography, and urban planning case study, the book’s timing is ideal: It is among the first full-length treatments of Bacon, and one of only a handful of monographs on Philadelphia’s postwar period. … Today’s urban policymakers might want to take a page from Bacon, especially his balancing of community, business, and political interests.”
—Dylan Gottlieb (Princeton University), H-Net

“Ed Bacon is thoroughly researched and exhaustive. Heller employs Bacon as the protagonist in the story of a city’s evolution, and it is both to Heller’s credit and to Bacon’s that the story is so compelling”
—Liz Spikol, Philadelphia

“Bacon was not merely the greatest urban planner Philadelphia ever produced, he was also one of the greatest characters to figure on the city stage in the 20th century. … What’s interesting about Heller’s account is that he doesn’t buy into the revisionist narrative of Bacon as an all-powerful master builder. … By studying Heller’s account, we can learn much about how Bacon navigated the political shoals to successfully realize as many projects as he did.”
—Inga Saffron, Philadelphia Inquirer

“[C]ontradictions seemed to mount in the life and career of Ed Bacon, who turns out to be both visionary and blind, progressive and reactionary. Heller captures an awful lot of it…”
—Nathaniel Popkin, Hidden City

“Most Philadelphians have at least heard the name Ed Bacon. They may know him as the 92-year-old daredevil who skateboarded across Love Park to demonstrate his opposition to the legislation eventually outlawing it. Or they may know him as the father of popular actor Kevin Bacon. But to those interested in urban planning, Ed Bacon remains nothing short of a visionary.”
—Nicole Contosta, Philadelphia Weekly